On Saturday 31 July, on what would have been the Pilliga Ultra, we instead (due to COVID) hosted a Virtual Run. We hosted a pre-race check in and a post-race debrief via zoom. We were absolutely stoked with the number of people that tuned in, participated and shared their running experience with us. Here are a few stories from friends of FWP that participated in the event…

The amazing Jody, who describes herself as “not much of a runner”, aimed to complete a whopping 20kms. If that’s not impressive enough, she kicked 20kms butt, instead running 23kms and following this with a beer.

Jody and her twin sister Nicole both turn 50 this year and were intending on celebrating their birthday away at the Pilliga Ultra, immersed in the great outdoors and supporting the movement against Coal Seam Gas in the Pilliga. They have both been fighting against this for about 10 years now.

Instead, both Jody and Nicole participated in the virtual event. Jody describes her experience as follows:

“I ran in Iluka – a small coastal town on the North break wall of Yamba in Northern NSW – and a short drive from home. Iluka has a world heritage rainforest, beautiful beaches and bay, the magnificent break-wall and lovely village all within a few kilometres. I really enjoyed the 23kms I ran on Saturday and wish to continue to improve.

After recovering in the car with a banana and mandarin I took myself to the local and enjoyed a cold beer.” 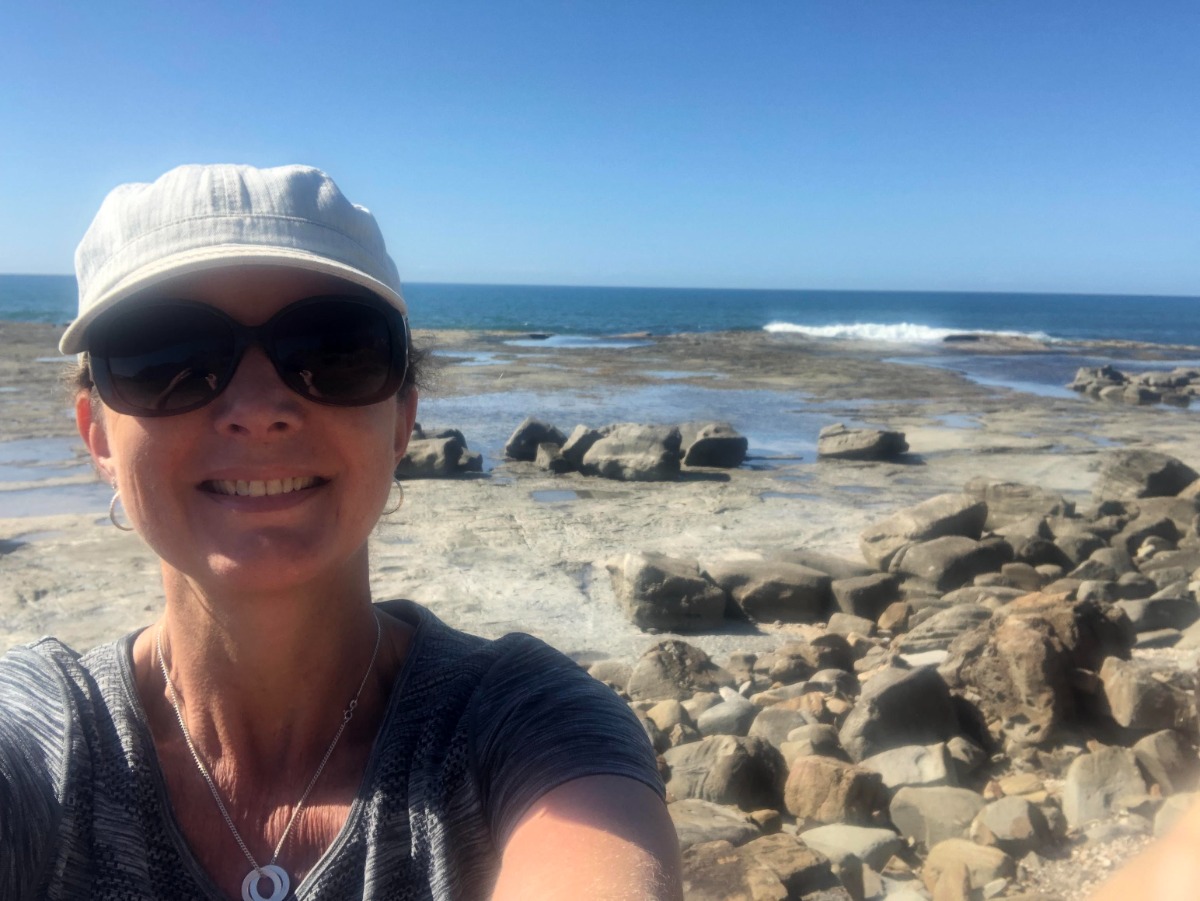 Jody celebrating the great outdoors as she smashes her 20km goal.

“You got this” were some very welcomed words of reassurance, given by a friend as Julian embarked on his 20km run. Describing himself as “an occasional runner of shorter distances up to about 10kms,” this would be his longest run and “a real challenge”.

Julian’s route traversed a fire trail and beach, and he describes his experience as follows:

“The fire trail runs parallel to the beach and gently snakes through a beautiful reserve of coastal shrub-lands, mostly flat but sandy in parts. Willy Wag Tails let me know they are there and lead me on in sections. A kangaroo bounds and breaks through shrubs and brings me back from my internal mantras (‘breathe, keep moving, lean forward a bit’). I turned around at the 10 km mark, and held a steady pace back. I felt pretty good at the end so I decided to add the extra 1km crossing a river over a footbridge and around Brunswick Heads passing busy Saturday morning cafes and back to my car.”

For Julian, participation in this virtual running event came amidst a few challenging weeks of work. “I work in live performance and am the Director of the company. Last week we had to cancel 3 major productions. There is pressure and stress amidst very uncertain times for many people and industries.” However, “raising money for a good cause gave me a purpose outside the consuming demands of work.” 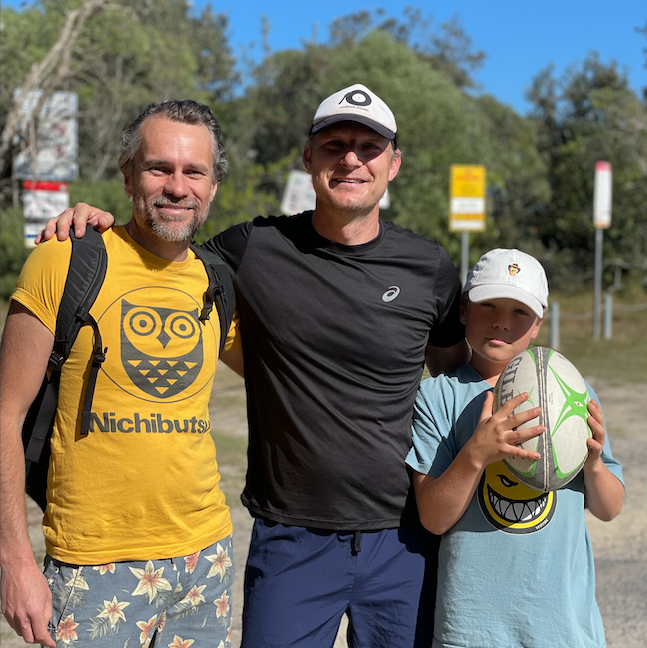 Julian (middle) with his mate’s who joined for the first few kms.

Damon did the Ruined Castle Loop in the Blue Mountains. Running along Narrow Neck, heading to the Ruined Castle and then returning to where he started via the Giant Stairway. Overall he covered a whooping 20kms, with 908m elevation, in 2 hours 20 mins – a stunning effort (literally, based on the pics uploaded to Strava).

Jack made a pretty good attempt at writing ‘For Wild Places’ in his local park. We definitely appreciate the effort (and know that this would have been accompanied with several odd looks from passers-by as Jack ran in small circles). 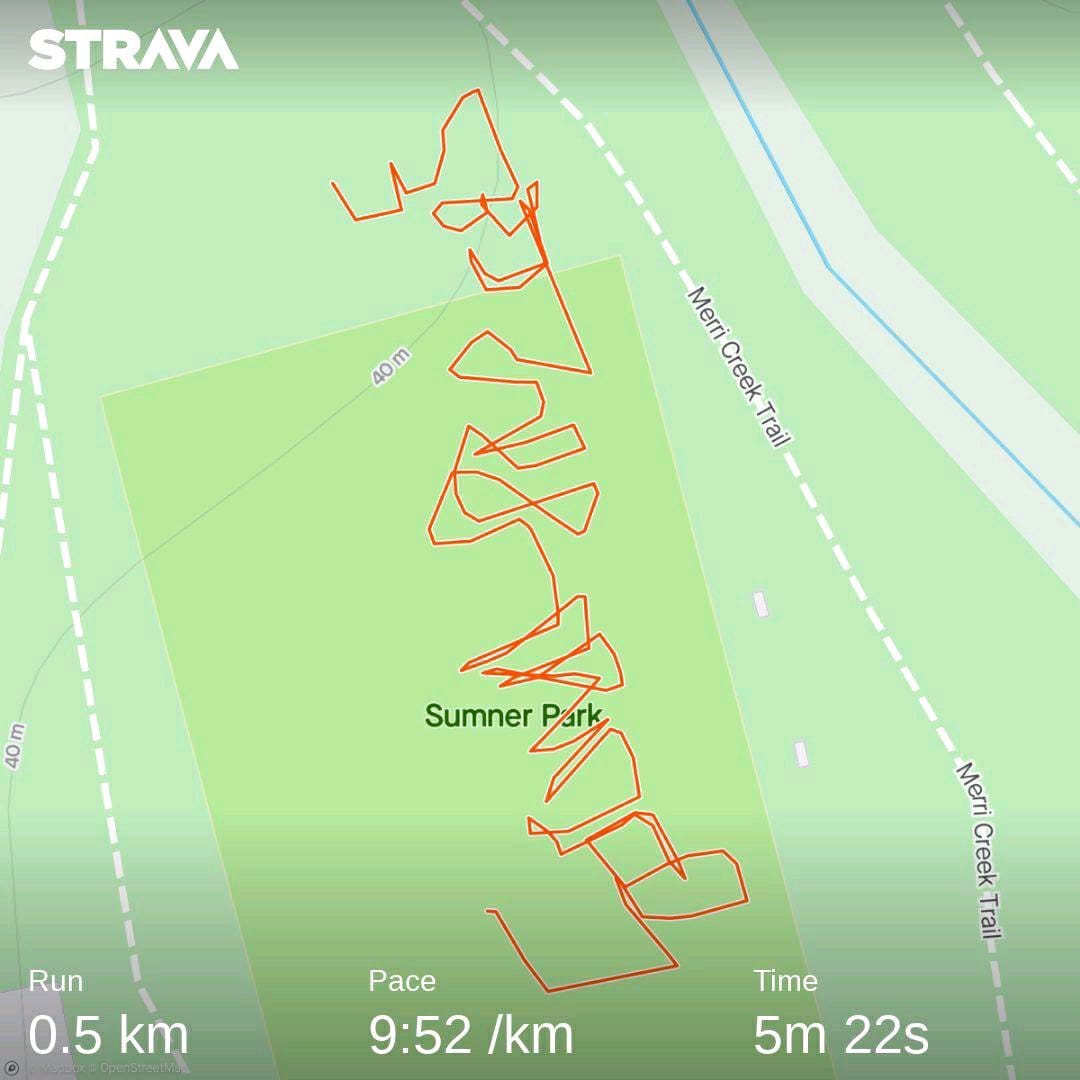 Patrick ran a half marathon in Sydney (remaining within the 10km radius/lockdown restrictions). What’s even more impressive is that his dad, Grahame, and sister (who is based in Wellington, New Zealand), also joined in from their respective locations. This made the Pilliga Virtual Run a family and international affair.

After hearing runners stories, Majell and Paige shared their nutrition tips, with strong recommendations to find what works best for you. Gels are great for a quick boost, but they aren’t for everyone. It’s runs like these (practice runs that are close to home) that are great for practicing your nutrition.

The FWP team also shared some recovery tips. Hilary recommends a beer and a nap (however I’m not sure in what order 😝 ) and Elanor recommends rest and not playing an intense game of AFL (or any other sport that involves significant lateral movement).

Majell jumped in and added that rest is incredibly important, as it allows the body to recover. To quote “when you’re out running, you’re not getting stronger. Your body is actually breaking down. It’s only through rest that your body repairs itself and then becomes stronger. If you play hard, you need to rest hard.”

Are you our next Board Secretary?